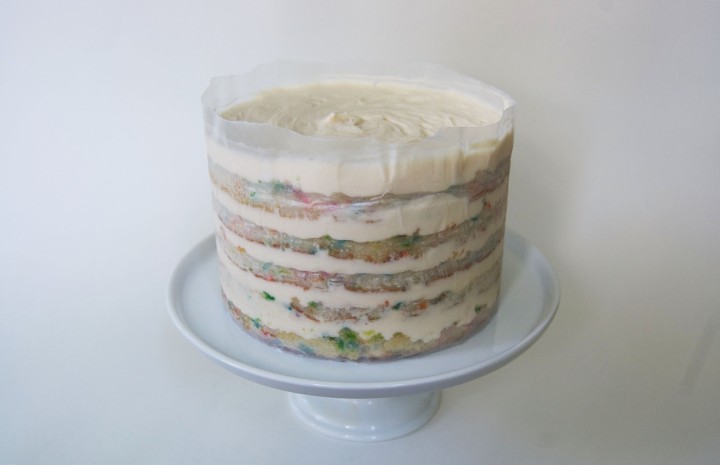 british english is so much better than american english.*  especially the insults. i’d much rather call someone a tosser or a prat than an idiot or a dumbass. i’d also like to start saying “cheers” in place of “thank you.”

apparently brits call sprinkles “hundreds and thousands”?? that’s cool. it’s sort of a mouthful but it makes sense. this cake uses a ton of them. i topped the cake with some multi-colored edible glitter that my friend bought me! it looks very similar to fish food flakes, i love it.

*EXCEPT FOR THE WORD SNOG!!!!! THAT WORD IS DISGUSTING

recipe/assembly creds go to the momofuku milk bar, as usual.

for the frosting, combine the cream cheese, butter, and shortening in a stand mixer and beat until fluffy. add the corn syrup and vanilla and continue to beat. gradually add the powdered sugar, then add the salt and baking powder. whip on high speed until the mixture is bright white and fluffy.

to assemble, use a 6-inch cake ring to punch four whole circles out of the cake. punch two semi-circles out of the remaining scraps. wipe off the cake ring and place it onto a baking sheet. line it with a tall strip of wax paper or acetate, then put a 6-inch cake board in the bottom. put the two semi-circles of cake into the ring, filling in the gaps with cake scraps. use the back of a spoon to spread on 1/5 of the frosting. top with a whole circle of cake and spread with another fifth of frosting. continue until you’re out of cake. freeze for at least 12 hours. remove from the ring and peel off the wax paper. pipe a border of frosting around the edge and sprinkle with edible glitter. keep refrigerated.