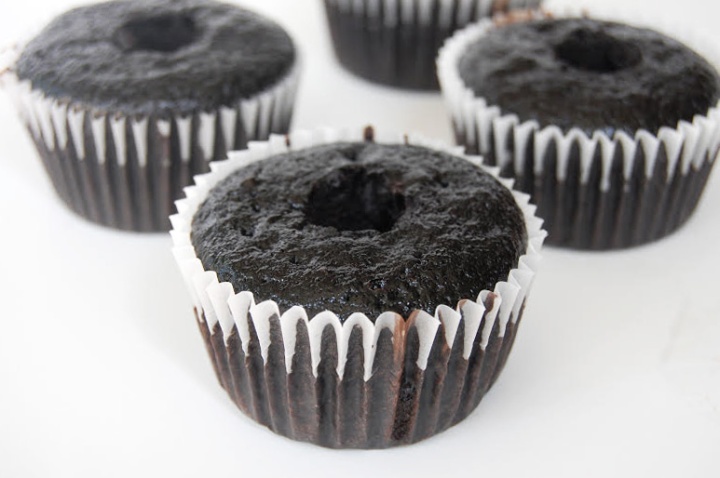 today’s my senior prom! i’m actually feeling pretty sentimental; it will be my fourth and final year of attending. freshman and sophomore years were great (i felt very cool being surrounded by upperclassmen), but i think this year will be the best. there’s something special about attending as part of the graduating class. but it’s also crazy and sad that it’ll be my last year.

on that note, i made some lucky charms cupcakes to take me back to my childhood because i’m afraid of growing up! if you’re a lucky charms connoisseur, you might’ve noticed that these are not the actual lucky charms brand marshmallows. this is because i bought them in bulk— just marshmallows, no cereal — and it turns out that when you do that, they come without the little rainbow / clover / pot of gold designs. oh well! they still taste damn good.

for the cupcakes, preheat the oven to 300º. line two 12-cup muffin tins with cupcake liners. pour the hot coffee over the chocolate in a heatproof bowl and let sit for a few minutes, until the chocolate has melted, then stir until smooth. beat the eggs in a stand mixer until thick and lemon colored. add in the chocolate mixture, oil, buttermilk, and vanilla. mix in the flour, sugar, cocoa powder, baking soda, baking powder, and salt. mix until well incorporated. use an ice cream scoop to fill each cup 2/3 of the way full. bake for about 15-20 minutes, then let cool in the pan.

for the vanilla buttercream filling, beat the butter, vanilla, and salt in a stand mixer until lightened. gradually add in the powdered sugar, then beat for about five minutes, until white and fluffy. add the heavy cream and beat for another minute. transfer it to a piping bag fitted with a large round tip.

for the chocolate ganache frosting, place the chocolate into a heatproof bowl. heat the heavy cream in a saucepan until it just begins to bubble, then pour over the chocolate. let sit for two minutes, then whisk until smooth. set aside 1/4 cup of the ganache in a ziplock bag (this will be for the drizzle on top of the cupcakes). chill the rest in the refrigerator for an hour. once the ganache has firmed up, beat it in a stand mixer until light and fluffy, about three minutes. transfer it to a piping bag fitted with a large round tip.

to assemble, use a cupcake corer, decorating tip, or paring knife to core the center of each cupcake. fill with vanilla buttercream. pipe two large circles of the chocolate ganache frosting on top of each cupcake, then cut a corner off the ziplock bag and drizzle with the reserved ganache (heat it for a few seconds in the microwave if it has solidified). top with a generous amount of lucky charms marshmallows.