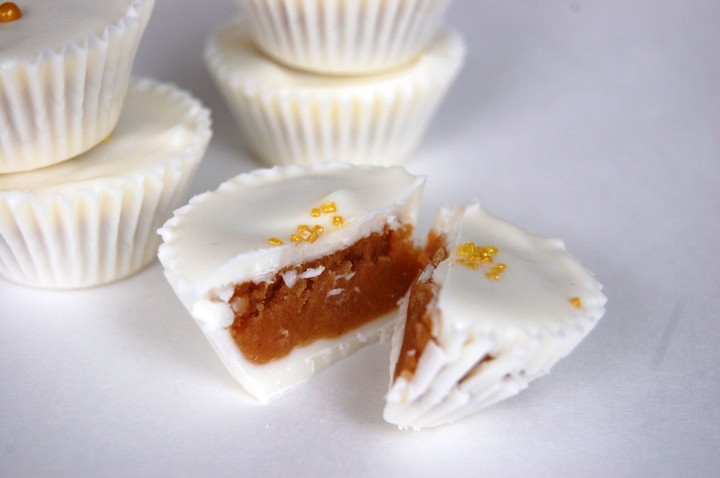 happy boxing day! i don’t really know what that means, but i’ve decided to celebrate by spending the day at barnes & noble. i always get a huge stack of cookbooks and pore over them by myself in the corner where all the test prep books are (no one ever goes over there). can you say INTROVERT.

last time i was there, i was looking at sally mckenney’s new book, sally’s candy addiction, and noticed a recipe for chai latte truffles. i’m morally against copying down a recipe without buying the book, but… they looked so good that i might’ve tried a little extra hard to ingrain the recipe mentally.

it uses a hardened white chocolate ganache, flavored with cinnamon, cloves, cardamom, and ginger, rolled into balls and coated in more white chocolate. i did something wrong, though, because my ganache never hardened. i eyed the white chocolate and realized that i could still use the liquidy chai mixture if i piped it into hardened cups. those turned out so well that i decided to make peanut butter and caramel fillings, too.

these are so versatile. using dark chocolate instead of white would be divine. layering the peanut butter filling with raspberry jam? yes. or even try piping them full of this carrot ganache.

for the chai ganache, place the white chocolate into a heatproof bowl. whisk together the cream and spices in a saucepan set over medium heat; heat until just boiling. remove from heat and whisk in the vanilla. pour the mixture over the white chocolate, and slowly whisk until the chocolate has melted and everything is homogeneous. cover with plastic wrap (press it down onto the top of the ganache to prevent a skin from forming) and refrigerate for at least two hours, until thickened.

for the peanut butter filling, beat all ingredients together with an electric mixer until light and fluffy.

for the salted caramel, combine sugar, milk, and butter in a saucepan over high heat. bring to a boil, then reduce heat and let simmer, stirring occasionally, for around 20 minutes, or until the mixture has a deep amber color. remove from heat and stir in salt and vanilla.

to assemble, line a mini muffin tin with mini cupcake liners. melt half of the white or dark chocolate melts in the microwave (1 1/2 minutes), and use a spoon to coat the bottoms and sides of the liners with melted chocolate. i take each liner out and do it individually. refrigerate for 10 minutes, then fill as desired: fill a ziplock bag with the corner snipped with the ganache or peanut butter filling, then pipe; for the caramel, just use a spoon. melt the rest of the melts, and spoon over the fillings until level with the tops of the liners. add sprinkles quickly, before the chocolate sets. refrigerate for 10 more minutes. leave the liners on, or remove them, it’s up to you! these keep at room temperature or refrigerated or frozen.